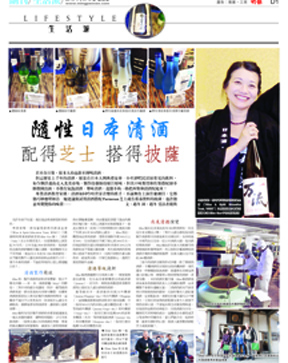 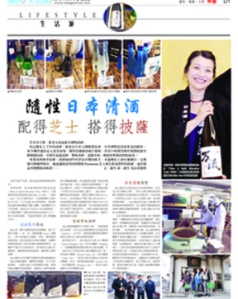 I was fortunate to be featured in last Sunday’s Ming Pao Newspaper in Vancouver. The Ming Pao is one of the largest Chinese daily newspaper chains based in Hong Kong, with overseas outposts at several major Canadian cities.

I recently received my Level 3 Award in Sake by the WSET, one of the world’s largest wine/spirits educators based in London, England, with schools that offer certifications across the globe. Being the first female in Canada to pass the examinations, the newspaper wanted to ask me some key questions about sake. I will be teaching the course as well, and hope to set something up in Vancouver.

I was happy they focused on how sake can be paired with food outside the realm of Japanese. Chinese food, in particular, goes wonderfully with sake. Because sake has so much umami–the 5th flavour/sense–and Chinese food has great amounts of umami–natural or sometimes added (msg)–the two elements match exquisitely.

Ah, Dim sum with a nice junmai ginjo or a sturdy junmai!

Steamed Chicken’s feet, a dim sum standard which I love, pairs nicely with Shichihonyari Gin Fubuki Junmai, a new offering in the BC market. Instead of warm tea, try a warm version of Fuji Takasago Yamahai Junmai Ginjo with dumplings like har gow or sui mai and don’t forget the cheung fun–a steamed rice noodle wrapped in shrimp, beef, or mushroom variations, topped with a light kiss of oil and soy sauce.

Sake is extremely versatile and with less than a third of the acidity of wine (some experts say lesser), the ability to match all manner of international foods with sake is endless.

All this talk of sake and food is making me hungry!

I also include a recipe for a sake hot toddy, which is the perfect warmer for this chilly fall weather we’re having of late. 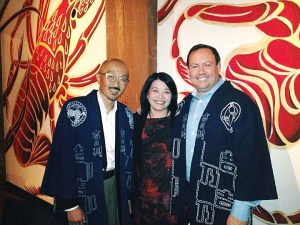 This Friday, October 17th, you can meet in person, Koji Kawakami, president of Yoshi no Gawa Sake Brewery from Niigata, Japan. He will be making a special appearance at Toku Restaurant in Richmond, BC, pouring some special sakes for customers. The restaurant, located at Lansdowne Mall, will be offering specials upon purchase of a bottle of Yoshi no Gawa to celebrate Kawakami-san’s visit. Above, is a photo of me with Kawakami-san (L) and Patrick Ellis (R), president of Blue Note Wines & Spirits, Canadian importer of Yoshi no Gawa.

Kawakami-san tells me that his brewery was established in 1548, and is the 5th oldest continuously operating sake brewery in Japan. They have never stopped producing in over 460 years! That’s pretty amazing–and something tells me they have a pretty good handle on making sake because of it. Because of its long-standing history, Yoshi no Gawa is also Niigata prefecture’s oldest brewery, so in fact, they are pioneers in this famous sake-producing region.

Kawakami-san will be in attendance starting at 6pm. Please say hello to him and taste some of his lovely sake. 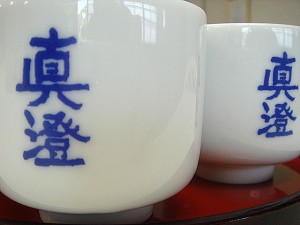 Hello Fellow Sake Fans,
Just a brief note about October 1st, which is World Sake Day. It marks the start of the brewing season and is a great reason to get together with friends to share in a boisterous KANPAI!!

Please get out there and enjoy some sake on October 1st! If you are indeed free, there is a tasting in Richmond tomorrow with Masumi Sake. Miyasaka Shuzo is an amazing brewery from Suwa, Nagano and their well-known brand is called Masumi, which is now available in BC.

Keith Norum, the Overseas Operations Director at Miyasaka Shuzo will be on-hand to pour samples of Masumi Junmai Ginjo “Karakuchi Kiippon” and chat about sake. He is a Canadian who has lived in Japan  for over 20 years and has some great stories to tell. Special food offers will be available with purchase of Masumi sake at the event.
The event will be at Toku Restaurant inside the Lansdowne Mall in Richmond. It is located on the Alderbridge Way side of the mall near the Toys R Us.

If you can’t make it, try to have some sake tomorrow! Also, this week in sake, you can check out the Tonari Gumi Sake Tasting Event. Tonari Gumi is the Japanese volunteer association in Vancouver, which assists Japanese seniors and new immigrants with their outreach programs. Their fundraising event boasts the largest sake tasting in Western Canada and it’s happening this Saturday, October 4th! Hope to see you with sake in hand this week! 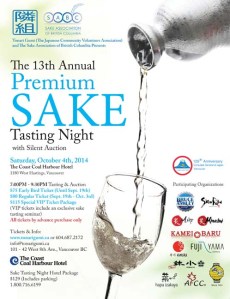 As the sake brewing season begins, we, as consumers, can celebrate the new sake year by imbibing in our favourite drink, for a very good cause.

Tonari Gumi is a Vancouver volunteer-run non-profit that assists Japanese immigrants and their families, Japanese-Canadian seniors and others, in a variety of ways to provide mobility and support for community services in Japanese and English. Tonari Gumi’s sake tasting fundraising event is in its 13th year–it was the first large-scale sake event of its kind in Canada, and continues to be the largest sake event in Western Canada.

This year’s tasting, sponsored in conjunction with the Sake Association of BC, will be on Saturday, October 4th, will be its biggest yet–you will not want to miss this! There will be a depth of not only sake, but food as well, with popular Japanese restaurants: Miku, Minami, Shuraku, Guu and Hapa Izakaya – just some of the stellar participants providing small bites to enjoy with the plethora of sake available to taste.

Held at the Coast Coal Harbour Hotel, the event will have an auction component as well with tons of great items to bid on. The tasting will run from 7pm – 9:30pm.

There’s still time to pick up an early bird ticket at $75. After Sept. 19th, the tickets will be $80. You must purchase a ticket prior to the event as there will not be tickets available at the door. VIP tickets are $115 and include a special sake tasting seminar prior to the big event.

Hope to see you there! 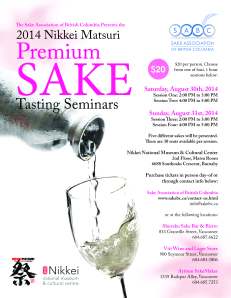 I hope you’re all enjoying the nice summer we’re having! I wanted to send you a note about some upcoming sake seminars happening at the Nikkei National Museum & Cultural Centre in Burnaby for their Nikkei Matsuri event. The festival will have lots of things to see, eat, taste and learn about–in particular for us, sake geeks–there will be sake!
The Sake Association of BC (SABC) is sponsoring four seminars during the weekend festival for a mere $20 per session. The hour-long seminar will feature five sakes to taste and discuss, as well as a great introduction to a bit of sake history and the grades/styles of sake available. By the end of the tasting, you will have no problem ordering sake from a restaurant or purchasing sake at your local liquor store.

Here’s a link to the details and for ordering ahead of time via the SABC’s website. Tickets are also available at Shuraku Sake Bar & Bistro, Viti Wine and Lager, and Artisan SakeMaker. You can buy tickets on the day of the seminar, but the last seminars sponsored by the sake association during the Cherry Blossom Festival were sold out, so best to get them early.

I hope to see you at the tastings!
Kanpai,
elise

Happy Spring Sake Friends!
The nearly month-long Cherry Blossom Festival is about to kick off this week in Vancouver and one of the premier events is the Sakura Days Japan Fair at the beautiful Van Dusen Botanical Gardens. This year, there will be 4 sake seminars (2 each on Saturday and Sunday) sponsored by the newly formed, Sake Association of BC.

Learn about sake from 3 certified Advanced Sake Professionals (ASP) and taste 5 unique varieties. Your sake guides will be myself, Miki Ellis from Miku/Minami Restaurants, and Iori Kataoka from Shuraku/Zest Japanese Restaurants. There will be much fun and discussion! Tickets for the tasting are a mere $10 on top of entrance fee to the Fair. You need to pre-register for the event on the same day you are attending. Come by to the entrance area of Visitor Centre Classroom where the seminar will take place, and book a spot. Registration opens at 10am, both days. Only 20 attendees per class, please bring a government-issued photo id. You must be 19 yrs of age or older to attend. Here’s a link for more info.

Hope to see you there!
Kanpai!
elise

#blacklivesmatter #endracismnow #solidarity
sage ladybug enjoys the sun whilst social distancing
Stroll in Ladner with the birds
I went a little bagel crazy for about 3 weeks. Everyone seemed to like them. 😋
Slainte! I do love Islay whiskies.
On the same block, some funny signs: 1st pic bottom row- is the chicken without rage or is it chock-full of rage; 2nd pic- Helen must’ve liked that rock band with the mullets from the 80s. Maybe that’s her specialty 🤔😉
Happy Holidaze! No white xmas here, but it’s darn chilly.
Been baking—here’s a few successes. The pillowy soft xmas cookies were hits.
Leafy awnings still leave me awed...
yummy starchfest at Long’s. still worth the table vulture culture of ‘hurry up so i can turn this table 2x in an hour’.
Autumn leaves leave us awestruck.
Spooktacular
Tatenokawa Genryu Hiyaoroshi Junmai Daiginjo of Yamagata. Made with Miyama Nishiki rice at 50% seimaibuai, using Yamagata KA kobo. We glugged it down, it was so good. Nice to get some hiyaoroshi, a signal that autumn is truly here.
So many tall people at Andrew Bird. ‘‘Twas an amazing show that ended well past my bedtime.
Eating some fave dishes. That soy chicken is so good—must order a day ahead.
My first sourdough loaf attempt. I am so excited. It looks a bit of alright. Thank you @samesamebutnotsame for gifting me some of your starter to help kickstart mine.
Stroll down the block from eating way too much, we double-down and get a float at the cute and bustling Glenburn Soda Fountain. Wish they didn’t use the glaringly unpleasant fluorescent lighting, but perhaps that’s for an authentic retro vibe. It just makes everything look ugly and clinical. I was also a little grossed out by the way the kids were scooping ice cream (no, don’t nudge it off the scoop with your finger) and pouring chocolate sauce onto sundaes, ladles touching each mound of ice cream and then being placed back into the main sauce container. 🤦🏻‍♀️ai yah!
Yummy Japanese nite with Masumi Junmai Ginjo, indulged in some uni and chu toro blue fin. We also had unagi tempura battera and a mix of different grilled fish collar (kama). Toyo is def a hidden gem in North Burnaby.
maneki neko’s arm is busticated
My first attempt at ja jiang mein. Oh boy was it ever delish, even the mama approved. Very easy and so flavourful.
vancouver sake
Powered by WordPress.com.